Feel the Static is the 19th level in Chip's Challenge Level Pack 1. Specifically designed to be quite easy, Feel the Static is a straight-forward item-swapping challenge built into a fun wall pattern. The hint tells the player every item that must be found and the order they are found in.

First comes the red key, which is found through the teleport right from the start. Next, the green button, which Chip can find just south of where he starts by crossing the thief. Continuing to the west is a red door guarding the yellow key, and east of the green button Chip can use this key to reach the fire boots. To avoid losing the fire boots, exit this area to the west of the green button instead of using the thief, and going back through the teleport Chip can obtain the blue key past the fire. Not counting the nine found behind the chip socket, there are four extra computer chips in the level; before opening the blue door, check the surrounding rooms of the level for any chips that may have been missed. By going into the teleport from the east, Chip will reach the other side where the chip socket awaits; with at least 60 chips in tow, break open the socket and cross the recessed wall into the exit. 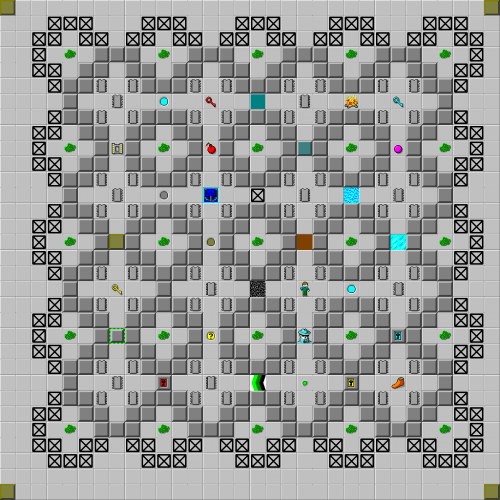 As he gratefully exited the the blob-infested ballroom, Chip felt a stirring in his memory. A faint recollection began to surface, of another, distant dance, and him, and - Melinda! Is that right? he thought incredulously. Did I really take a girl like her...to a dance?! The more of the memory returned, the more sure he became that it had indeed happened, and a glow of pride filled him.

"I remember now!" he shouted excitedly. "That was how I finally plucked up the courage to try the Bit Busters' initiation! I had spent weeks working up the nerve to ask Melinda to e-prom; but she said she'd only go with a member of the club. So then I decided I had to join, or die trying!" He laughed with joyful relief. "I'm starting to remember! Just wait till I tell Melinda!"

He hurried into the next room, hoping to hear her voice on the loudspeaker. But all that awaited him there was hard, unfeeling static.