Island Beginnings is the 1st level in Chip's Challenge 2 Level Pack 1. Being the first level in a fan-created level set, Island Beginnings aims to serve as more or less a refresher on the more basic rules of Chip's Challenge 2. Of course, being in a community level pack, many players are already familiar with the basic rules; a more experienced player-base may also find themselves searching to break free from the level's normal boundaries in search of tantalizing bonus flags. Beyond just being a tutorial level, Island Beginnings and its opportunity for bonus flags serves as a prime example of how a level can completely change depending on the mindset of who is playing it.

Many elements re-introduced in this first level are simple topics first introduced in the lesson levels from the first game; including the computer chips that must be collected to open the cosmic chip socket, keys and locked doors, deadly monsters, dirt blocks and how they interact with water, recessed walls that spring up from the floor, and green toggle walls that flip at the press of a green button. Some elements new to Chip's Challenge 2 do get their time in the spotlight here, however; such as the green toggle chips that change between green bombs and green chips with each green button press (alongside the green toggle doors - the green button changes the state of both), railroad tracks that lock the movement of things riding them along specific pathways, and the rotating swivel doors that rotate when things push on them.

For curious players, there are also bonus flags to be discovered; in the small area with rotating swivel doors, two yellow 1000 point flags can be observed on a distant island. If one wishes to reach this area, players must go against their instincts in the previous recessed wall puzzle and take only one computer chip, thus making it impossible to collect all three, but also making it possible to pass through the area a second time. Coming up on the small puzzle with two dirt blocks, the first dirt block must be pushed down instead of up; and this is where the second recessed wall path comes into play, making it possible to approach the blocks from the right side and move them down the railroad path to the top of the level. There, both blocks can be used to make a bridge to the outside perimeter of the level, and just to the right there is a pair of flippers which can be used to swim all around the map to the island where the bonus flags are hidden. An extra computer chip is also provided to make up for the one left behind in the recessed walls, allowing Chip to take the 2,000 bonus points with him to the exit square. 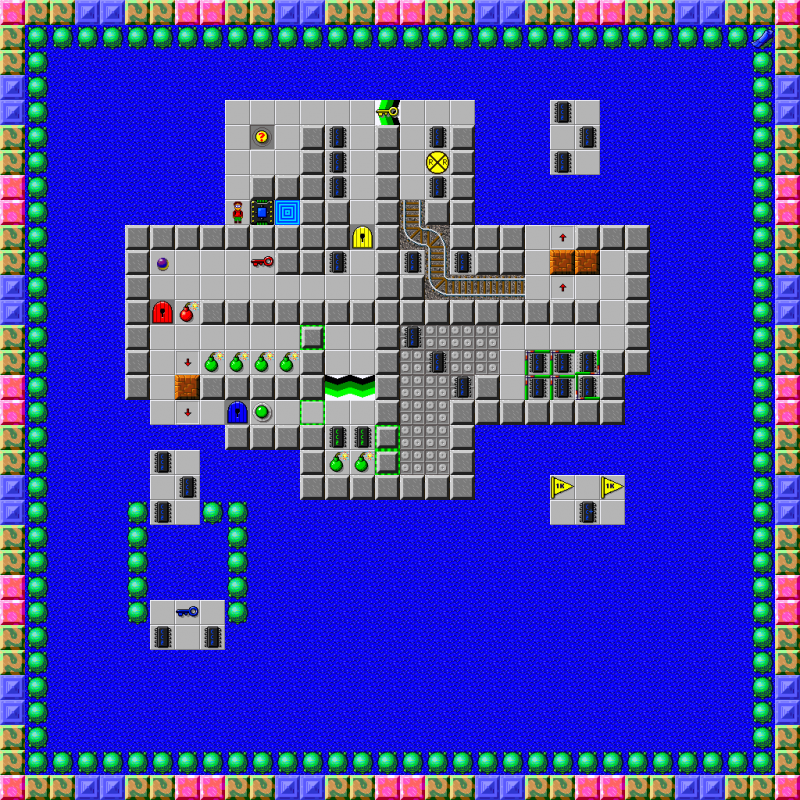