Key Color is the 149th and final level in Chip's Challenge Level Pack 2. It was designed by David Stanley and is the fifth and final secret level in CCLP2. In Key Color, there are several consecutive locked block sections where each block is used in different locations. Since it is the ending of CCLP2, the player can expect a hard challenge. The color of the keys correspond to sections of levels of which have the same color tiles (for example, a red key unlocks blocks used in a section filled with bombs).

This article describes the steps required to achieve a time of 408. Since this article's original writing, the fastest time has increased substantially to 424.

Pick up the blue key, build to the red key below, and then build one space to the west, jam a second block past that to truncate the fireballs, and use the third to stop them permanently and reach the yellow key above. With these three blocks, drop one onto the trap, hold it open with the second and move the blocks 4R and 2R. Now, use the third to release the second and, then move the blocks 2R and R to reach the green key (note that only two blocks are required in Lynx to grab this key because the second trap will push its held block onto the water as soon as the trap button is pressed). Move the two remaining blocks 2R each and work another chain with green block 2 to pass a block west of the blob clone machine to the level proper; Chip does not need any of the other four blocks.

Since Chip already has a green key, use it on the green lock, and now move ULU and use this block to reach the first water in the Switch Hit section. Collect the chip to the left of this water, then switch and return to the other two blocks. Move block 1 2D, block 3 2R, and block 1 west into some water. Carry block 3 through the northwest, stop to switch, then continue to push the block 5L, then switch again and go around to move it DL, meanwhile collecting the chips in the north center and northwest. Switch one more time and use the block to reach some goodies, and then remove the yellow lock. Throw block 3 2L and block 1 2D 8L into the gap in the water, then carry block 3 to UR off this and shove block 1 through the bugs. Chip can take the red key, then the six computer chips, and pull block 1 back out on the way to block 3: follow this into the teleport.

Step L to dodge the returning block, then spring step [1/2] R >D, and also throw yellow block 1 through the teleport. In the same manner, move R [1/2] L, but this time continue LUR and use block 3 to bridge to the four chips on the right. Retreat back along the same path and use the ice across the top to get underneath block 1. This time, use ice to speed the path from chip 2 to chip 3 and the retreat back. Slide into the teleport from the west, open the red lock, then throw red blocks 2 and 1 to the bombs, which access all the chips in this room. The blue key here and its consequent blocks will not be required.

Finally, move red block 3 out and into the water (up to [2] can be lost on blobs), take chips 7 and 5 first, then circle counterclockwise and exit the level, thus completing CCLP2.

Along with a handful of other levels such as Fire and Water and Fire Bugs, Key Color received an edit from its original form, this time to the level itself - the addition of some gravel spaces, particularly the one near the blob clone machine. This was done to wipe out the astronomically low chance of blobs wandering all the way through the block room, all the way south, and exploding a bomb for Chip, which would raise the bold time significantly but be, for all practical purposes, impossible to replicate if it were scored. 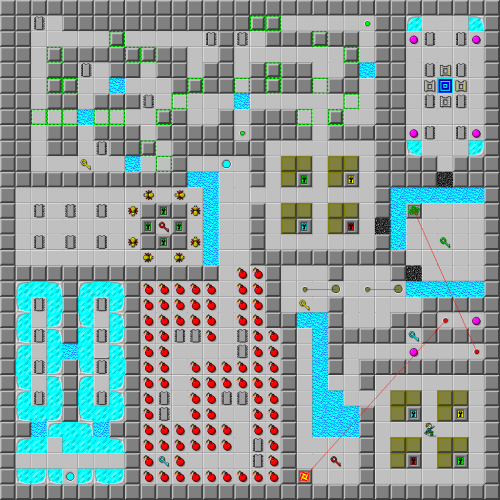