Fire Bugs is the 76th level in Chip's Challenge Level Pack 2. Fire Bugs is one of two levels which received a name change during an official CCLP2 revision; it was originally called Fireflies, which is the name of a CC1 level. Fire and Water also received a name revision from its original name.

To complete it, take the first two chips to the north and then south, and then follow the bug on the left to two more chips, and continue moving right and north to another chip. Chip can sneak past the bugs, go back to the start, take that chip, and teleport R and step U and right. Eventually, Chip comes to a red button, which will remove the water below the flippers. Chip also reveals a second Chip tile in the process, though this for all intents and purposes simply acts as a recessed wall.

Now, go back to the teleport and step 2R to reach the last chip; while an exit is in the lower right, it's sealed airtight by gliders. There is, however, a socket in the northeast, accessed by >LU, and a further U step leads to fire boots. Teleport back down, and then step on the single isolated space in the extreme southeast of the fire area to reveal the hidden exit. 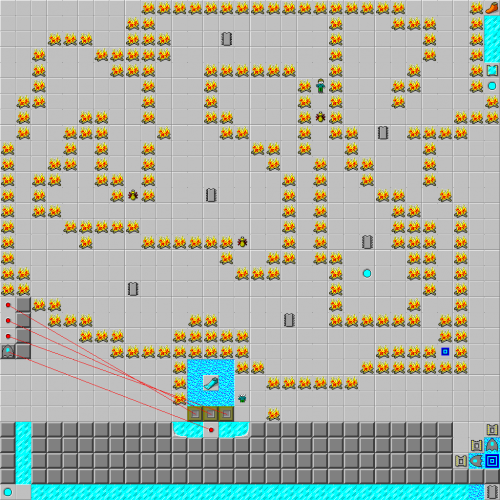