Manic Depression is the 122nd level in Chip's Challenge Level Pack 3. It was created by Madhav Shanbhag, and is typical of his style - unusual passages from one room to another and casual use of intermediate-level game mechanics - which often requires multiple attempts to understand.

All paths through the teleport are currently blocked; clone three blocks and send them through two water spaces and a bomb, being extremely careful of cross-checking, to collect the red key. Use this to negotiate the itemswapper along the way back to the teleport, ending in the computer chip, and teleport >L to the next room. When Chip entered column 1, a teeth followed him and touched the green button that opened this toggle wall; push either block onto the wall and D, then wait [1 1/2] and teleport >RL such that the block lands, creating partial posting in front of this teleport, before Chip attempts to return to this room.

Immediately move D 2R into the next room, where a monster (intended to be the tank originally) must erase the teleport from the network by landing on it after Chip has used it. Shove block 1 3U R, then wait [6 1/2] before teleporting >RL again to safety at the start. (An invisible wall blocks this exit.) In MS and using the bold route only, clone two blocks (one in Lynx) and then teleport >R to the bug room; remove the socket and blue wall 1, then divert somewhat north (the south path contains hidden walls) and attempt to steal the red key from the blob, walker and paramecium with a maximum loss of [1]. Odd step is recommended, since this allows the paramecium (ahead in the monster order) to push the random monsters back further upon their first collision.

Use the key to access the ice skates and green button, then teleport >R and spring slide 2R. In the 504 route, slide delay occurs at this exact time and a dirty trick is possible using the spring slide; this is not possible without skates because of the block echo and cross-checking. Two safer solutions skate after the block, either catching it at [22, 3] or pushing it back U from the very end of the slide; the latter works in both rulesets and is referenced in the hint. Once the block is through the teleport, move it back towards the exit; simplest is directly to 3D away, which will cause a long wait for bugs to clear. In the 504 route, move it to 4D 2R away, wait [2] and then push it back U 2L, wait [3] and then finally explode the bomb to exit. 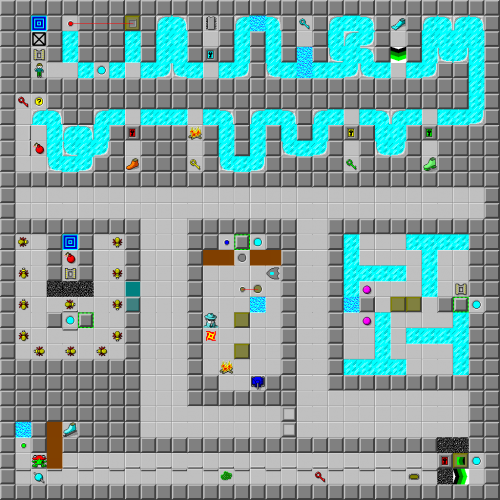