Tele-Portion is the 32nd level in Chip's Challenge Level Pack 2.

If someone plays Tele-Portion for any significant length of time, they will figure out that the chips to the left of the teleport at (16, 10) are inaccessible by normal means; they must use a partial post to do this. This job, though obvious, is in practice very difficult because of several noticable differences from Partial Post: the hint is more vague, the teleport sequence is much more difficult to figure out, and the blocks are more difficult to arrange. Mistakes often require the player to start over.

Collect some of the chips with 3U 5R 3D L 2U 3L DRDL, load two blocks into the teleport, and use the second to teleport back west and collect four sets of chips. Move a third block in and then simply slide >LRLRL, collecting the chip above the start teleport, and then load a fourth block in and follow it to the initial corridor. Slide 2:[>LRL] to collect the remaining chips in this section, and then >RU to reach the final two. Return over the ice path, which will allow Chip to exit now that all the chips have been collected. 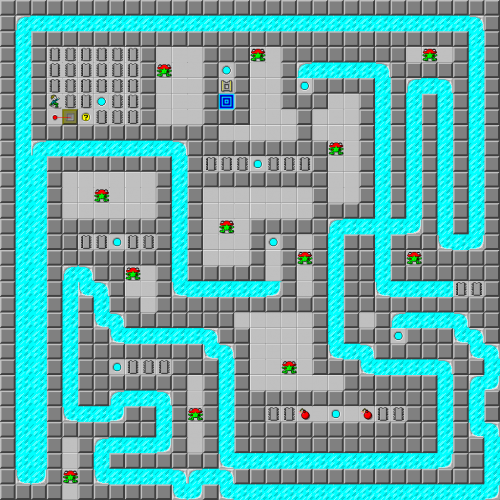