Abandoned Mines is the 92nd level in Chip's Challenge Level Pack 2. This level is quite easy to complete if Chip simply sits around and waits for the obstacles, or walks around the teeth; the hard part, of course, is scoring high. Fortunately, the bold time is 459.8 - meaning up to [4] can be dropped and the bold can still be achieved. Odd step is required for this route.

Clear out the first blue wall on the right, and then steal the chips from the bugs in a general clockwise direction: start with three in the chain of five, then the one to the south, the one to the west, the one to the north, then the first six in the chain of nine, the chip on the right, and finally the other three. Now, try to steal the flippers, and now follow LULU 2R U, which will hopefully allow Chip to sneak through the blobs. Up to [1] can be dropped in this section due to an upcoming teeth section; losing more time will mean more precision will be required in the upcoming boosting section.

Follow the force floors, move up over the first west force floor, take the four chips, and continue moving through the maze. To make this section slightly easier, move L and >[D 2R] D off the last chip instead of the rapid-fire 2D boost, as Chip can stand the loss of [1] due to an upcoming teeth section. Take the first chip on the left, waste the spare move if Chip hasn't yet, and then collect the other three chips east, south, and west. Move D, then [1] for the released teeth and slide through the force floors, which just sneaks past the teeth as they charge northwards. 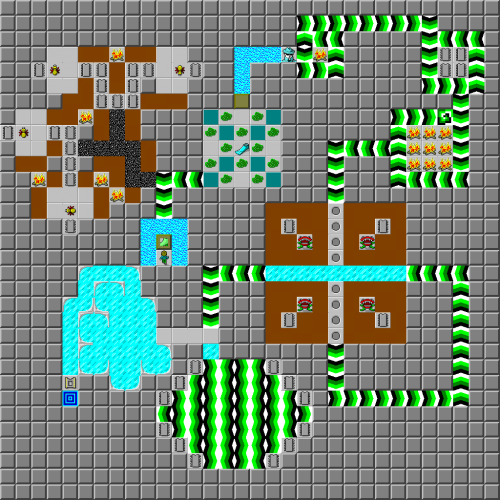