Exit Chip is the 93rd level in Chip's Challenge Level Pack 2. In the original set, the hint boasted that this level would never be solved, at least without a level editor. Its claim is backed up; the endless booby traps and hidden items make Exit Chip a struggle in controlling frustration, and a puzzle that some say might be too hard.

Take the chip hidden in the corner near Chip, then hidden along the very bottom edge, and then the one hidden in the far northwest corner, followed by the flippers in the northeast corner. Chip can now play through the central corridor, exposing a bomb and four locks, removing the socket under the block, and revealing a water space which Chip can fortunately swim through as he pushes the block.

Pass the six inverse corridors, then turn north, wend through the continuing barrages of pink balls to the very south, and then to the southeast corner. Use the long way to avoid a hidden trap, then wait [1/2] for this ball and take off to the northeast corner, which contains suction boots.

Return back to the ball chamber at the bottom, then reveal the hidden block on the top edge of the alcove to the left and use it to return to the center. Now, pass the single bouncing ball, go through the open passageway which then reveals a wall, and take what ends up being the four keys in the passageways with the force floors. Now, remove the water and locks, and then move past the first set of pink balls and take another hidden block from near the water space to explode the bomb. Go back to the very start and walk over the force floor into the buried exit. 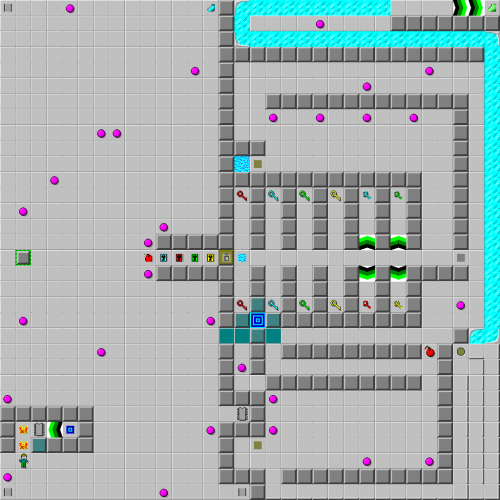