All About Blocks is the 49th level in Chip's Challenge Level Pack 3. It was created by Tyler Sontag and demonstrates the uses of blocks in many different forms: removing destructive obstacles, redirecting monsters, partial posting and hitting buttons among them.

Push the first block 2D L, letting a glider release Chip into the next room, then the second block 2U L and wait for the bombs to explode. Take this chip and move the next block 2R D, which forces the glider to open the toggle wall. Push block 2 north, as only block 1 can push south; continue through the next room and use the clone block to bridge north to a chip and explode a bomb to the south. Pick up another bomb-protected chip, then circle the next block around the force floors to access the next room. Step D >LD R, then catch the sliding block with D and move >RU 2L >DR D to follow it through to the next area ofthe level.

Chip cannot hit the blue button himself as he will be trapped; collect the block in this room and push it onto the button instead, then take the block in the next room and move it 2L off the northern gravel. One fireball gets deflected over to the brown button; take the chip below that area, then run back to the trap as you have to be perfect to catch the button's next press. Circle around the chips and bridge past the water, then push the next block west, D and east to the next water space. Shove the block below Chip into the teleport and use the partial post this creates to reach three chips, then slide back and >R to reach the other area with the partial post, freeing the remaining chip.

Send the next two blocks over the ice, being careful of cross-checking on the second one, and then clone a sliding block onto the horizontal ice; since missing the block will cause Chip to drown, it is fortunate that Chip can catch it by simply walking underneath the water and pushing upwards without waiting at all. Move the last block 2D LD and continue to squeeze the fireball clone machine until you can pick up the next pair of fire boots, allowing Chip to exit. 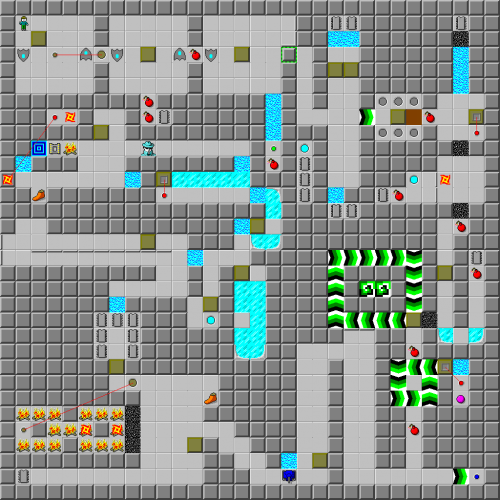