Blocks 'n Bombs is the 125th level in Chip's Challenge Level Pack 2. It was originally intended that Chip would use the red key near the sockets to reach a yellow key, then the block behind the yellow lock to stop the fireballs from cloning. Instead, Chip can get the block from somewhere else.

Move to the top first and take the blue key. On the way back out, touch the blue button to remove the bug and take the items on the right. Now, Chip can use the bottom pathway: Open the toggle wall, then wait [4] for the block to appear and move it 2R and into the first bomb. Move the next two directly north, then on the fourth wait [1] before touching the button to keep the pink ball from being trapped, and continue to build to the three items. After collecting these, Chip can break through the center passageway with the green key in his possession.

Join the circle of bugs to clone one block, then push it DRL to trap the bug in two spaces. Clone again to permanently enclose the bug, then collect the goodies it was guarding and move the block out to the sockets. Remove the socket in front of the block, then throw the block into the teleport and U. This stops the fireballs cloning, and Chip can now teleport back and squeeze through the corridor to the exit without dealing with the red or yellow keys.

In Lynx, Blocks 'n Bombs cannot be solved because blue keys are erased by objects. CCLXP2 simply switches the red and blue keys and locks to solve this problem. 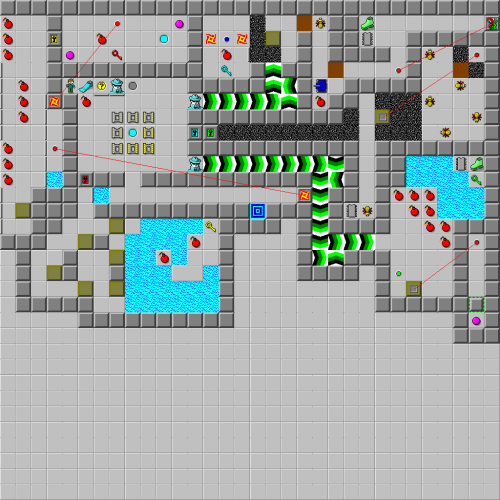