Dodge! is the 126th level in Chip's Challenge Level Pack 2. This level is completely constructed of pink balls cloning fireballs in patterns, which Chip must figure out to dodge them. This type of technical level is typical of Eric Schmidt's compositions.

The first one is easy: 3:DRUR 2D. For the next one, step 2D 2L off the ice skates and move 2:ULDL D to the opening and wait [3] for the next run before jumping in. This dodging pattern is more complex: 2:[3R [1] D [1] U] 3R [1] D. In the last area, move onto the first ice and then step 3L DLU 3L 2D. Throw away the ice skates to the thief and slide onto the ice that runs around the level, eventually returning to the exit.

Different types of move order mechanics are taught by deeper analysis of the fireballs in this level. Involuntary moves by sliding objects are processed before voluntary moves, which means that Chip cannot hope to skate past the sliding fireballs at the end, but Chip's involuntary moves are processed before monsters are. Hence, when Chip steps on the ice in front of the exit, the fireball moves out of the way before Chip hits the square, but even though the next cloned fireball is R away Chip slides first and is not killed.

When Chip uses ice skates or suction boots and is closely tangling with sliding monsters (or blocks that Chip attempts to avoid and not push), the monster will move two spaces in a turn while Chip moves one. The order of these moves allows for unusual situations, both seen in the AVI solution: if a monster is two spaces behind Chip, he can safely dodge it because only its first involuntary move is processed by Chip's Challenge before Chip is in the process of leaving the square, and if a monster and Chip are attempting to step on the same sliding tile at once, the fireball's second move is processing before Chip's first move is done processing and Chip will survive. 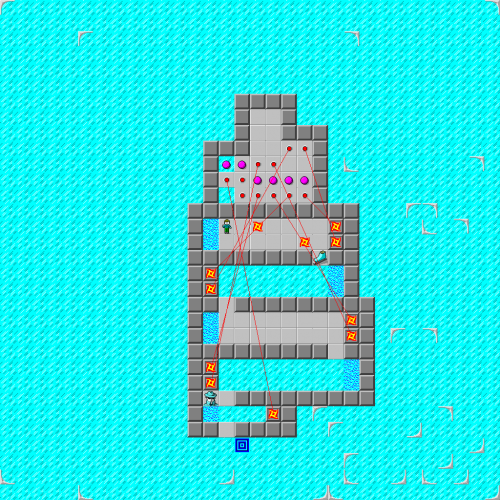