Checkerboard II is the 94th level in Chip's Challenge Level Pack 2. Checkerboard II is far easier than the original, as all Chip has to do is move six blocks to each room and through toggle walls; many flicks are required to perform this job.

The four rooms require the blocks to destroy bombs (west), remove water (east), block out fireball clone machines (south), or hold down brown buttons (north). The 25th block can reach the exit in any area, but because the fireball clone machine blocks the way back from rather than the way to the exit, Chip can safely pass it without the block.

Chip has to use at least one of the four pink ball cloners to change the walls for him; the given solution does it with three, which wind together into a polyrhythm that keeps changing every move. In addition, the given solution found a way to use the fireballs to remove the bombs instead of utilizing all the blocks, saving quite some time.

The shown solution is that of 776; while 788 has been confirmed, nothing beyond 776 exists on any form of video or in any guide.

Chip is not able to push the blocks off closed toggle walls, so it is not possible to get any of the chips or reach the exit. To make this level solvable in Lynx, edit out the middle rows of toggle walls in each room, and change either of the other two rows so they are not open at the same time. 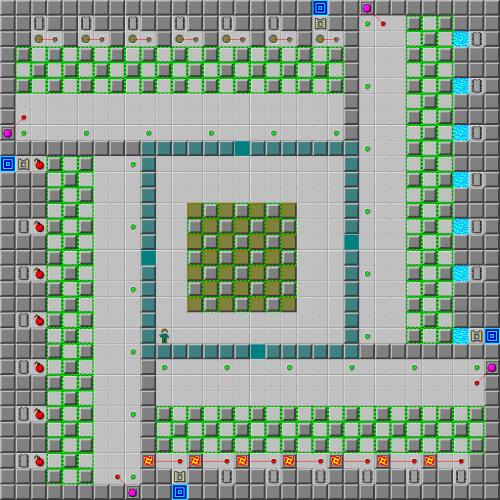