Just Enough is the 81st level in Chip's Challenge Level Pack 2. In this level, Chip must clone a series of blocks in order to get one to the very center; however, he can only clone four of them before the teeth escapes the changing toggle walls and stops the cloning. Therefore, Chip cannot reach either exit on the sides or build over to the center, which each require nine and eight blocks, respectively.

For a simple route, simply build three blocks across the lower ice strip, using the fourth to erase the thin wall under the suction boots due to the rules of transparency. Push the block L, then move RDL, clone a glider to explode the bomb, and slide to the exit. This 323 no boost route is easy, but a bust was discovered which allows the extension of the bold time to 346.

Begin by moving the first block R 2U 5R D, then the second R 2U 6R 2D onto the ice, and lock it into place with the other block. Collect a third block, move it R 2U 5R D as well, and lock a second block into the ice the same way. When Chip slides at the right time, he can pick up two of the blocks without having to slide all the way back to the start.

When cloning block 4, use a spring step: [1/2] RL, which alters the slide delay slightly, and also move 3D 2R to avoid releasing the teeth, which would land on the force floor and contribute to the slide delay negatively. Chip must wait a total of [4 1/2] for the sliding blocks to line up properly, so this [2] loss can be spared. Carry the block out onto the ice strip underneath and wait the remaining [2 1/2] before following it; the clock should tick down to 471 on the second ice space.

Continue sliding R, which will pick up the first block, then jump DR back to the original space, and R to collect the second sliding block. Go back to the start to collect the fourth block, then move it onto the suction boots as normal. In addition to two [1/2] waits already exorcised from the route, a full [1] is saved when Chip can follow the block onto the boot with absolutely zero block echo, compared to the 345.4 route which lets the teeth fully escape. (The [1/2] spent waiting for the block would keep Chip from being able to use a spring slide, which will cost another [1/2].)

As before, when pushed L, the block has created a dirt which deflects the glider eventually into the bomb, allowing Chip to exit from the two force floors. Because the final voluntary move is the second half of a spring step, a normally 345.8 route now becomes a 346 -.9 route.

The only thing stopping Just Enough from being played in Lynx are the suction boots on top of a thin wall. In CCLXP2, thin walls were placed at coordinates (19, 16) and (22, 14); although this eliminates the possibility of using transparency to collect the suction boots. 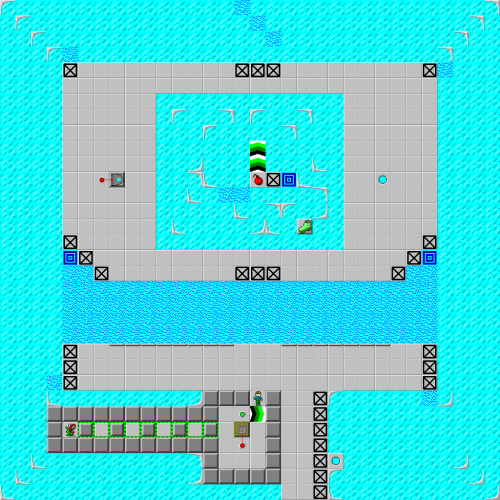