Mouth-Watering is the 98th level in Chip's Challenge Level Pack 3. It was created by Grant Fikes. It requires careful handling of several monsters to accomplish goals, plus careful logic and educated guesswork; there are many exits and the one that works appears securely guarded, but is trivial to find when seen in the editor. Even step is recommended, as although odd step would save [1] at the start, this does not matter due to waiting in this section and even step will be faster later on.

Step U and wait for the teeth to clone a block, then push it downwards and ride the force floors to the right to get the teeth ready for volleys that will clone blocks to be pushed north. To get back three times, three pairs of suction boots are given, but with bouncing gliders in the way. When pushing block 3 north, hit the other red button to trap the teeth permanently, as collecting the blue key immediately allows a fourth block to clone and the thief below Chip bars its further passage. Surge downwards, open the blue lock and close the toggle wall, then barge through it as the teeth opens it up, and he will follow Chip down the ice to explode the bomb in front of the flippers.

Use a spring step to step either UR or DR onto the flippers, then return to the vertical gliders and teleport >U, collect the three chips and remove the socket. The teeth will drown as Chip assimilates the five red keys, which are used back at the teleport to collect fire boots. All the exits appear either inaccessible, securely guarded by monsters or require both pairs of boots to reach (as with [30, 30]), except that the blue wall at [19, 16] is open and Chip can enter this exit from the fire maze.

Due to its unusual structure, tricks, and red herrings (some items are left uncollected), this level contains logic challenges later seen in CCLP3's hardest challenges, such as You Can't Teach an Old Frog New Tricks and Avalanche. It is a valuable tool for teaching understanding of what is and isn't possible, using technical knowledge about the level's design and even the levelset's patterns and criteria.

The teleport Chip enters has three possible entrances; at the time of the blue key, only D and R are available, and these both cause death in water or fire respectively. The guard mechanism that can block off the recessed wall corridor suggests that the blue key should be used there instead of by the teleport.

There is a side path of the recessed walls that leads to an unknown destination, causing a cook when Chip uses it and traps himself between walls on ice, while the path beyond the blue lock can be inferred as leading to the toggle wall and sliding ice.

In MS only, it is possible to not touch the green button in the teeth room, override the force floor and return to the toggle wall; with the wrong teeth parity, Chip is beaten to the toggle wall and dies. Many instances of apparent guesswork in CCLP3 can be avoided using other solutions or logic; with this solution also not Lynx-compatible, it can be discarded as the intended one.

Eventually, the selection of exits is pared down to three once it's clear that both boots cannot be held at once; these are [17, 9/29] and [18, 16], meaning fake blue wall(s) must exist to access any of them. [17, 9/29] would require Chip to release the gliders, and in most places this will send them into fire; due to the general equality of MS and Lynx solutions in CCLP3, these are not likely. The flippers are required to attempt [18, 7], but when this also fails, the only remaining option is to avoid the gliders entirely by attempting to open [19, 16]. 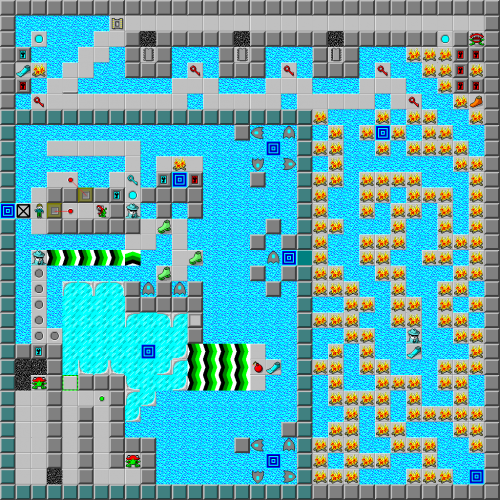