Pain is the 134th level in Chip's Challenge 1. Doubtlessly named for the unbelievable amount of time required to play through, and the resultant annoyances, Pain is also a hard puzzle. In order to get any score, some type of guide may be required.

The bug section at the beginning will pose little problems; there is a small incidence of the Controller and Boss Glitch which makes things a bit easier. Since most of the time spent will be in the lower area, this guide will concentrate on the most concise way to pass it. This is what it looks like at the beginning (the gliders will burn up quickly; as an exercise, determine where they will die):

Chip requires 68 blocks to reach the exit; he has 86 that he can use. Take the fire boots with one block, build all the way down to the last chip on the right side, then build down and west across 24 further water spaces, stuff a block onto space 23, and then connect the two bridges by building across the water above this block. Now, remove the 4x2 water pool on the left, and then build 25R across the bottom to reach the exit.

Use some of the tricks in the AVI solution to speed the process up: use blocks closer to the last chip to build through there and those closer to the fire stream in the second half of Pain. Considering Pain is the longest level in CC1, reducing its length of play - over 15 minutes in real time and 13:01 in CC time - is key to making it easier to play.

In Lynx, there is no Controller and Boss Glitch, making the bug section a little more difficult. In the water section, you need to watch out for gliders because they don't die in fire. In addition, splash delay adds 3 moves per block, adding (3 moves/block) * (68 blocks) / (5moves/second) = 40.8 seconds alone. Even with these problems, the Lynx bold is 192, only 26 seconds slower than the MS bold. 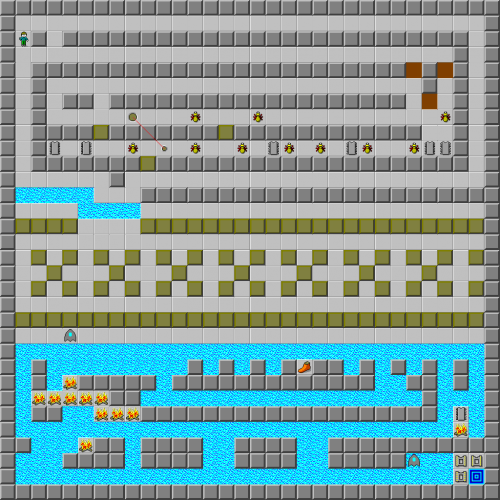