The Search for the Exit

The Search for the Exit is the 78th level in Chip's Challenge Level Pack 2. While very easy on paper, in practice the secret traps and other obstacles will catch Chip a few times before he wins it.

Move to the first teleport, slide >D to collect the boots, then hold the east key to slide >R twice and move north to some chips. Use the recessed walls to reach the thief, then move across the force floors and ice spaces, and then R >[R 2U] R off the southwest corner. Now, move to the left slide, shove out the block, and collect the chips from above the red button clockwise to below it, in addition to a hidden green key. Chip will exit out through the socket guarding the green lock in this 295 route, which allows large amounts of leeway: up to [22] can be lost in the entire route up to the point where the socket is opened.

Move all the way to the left and up to a circling glider and chip, take the chip from the top, and come back out along the edges as well. The exit near the pink balls has a hidden trap; ignore it. Return to the gliders moving around another exit, open the socket and green lock, and squeeze to the left, moving into the exit when the paramecium is gone.

The exit in the center of the level is guarded by a buried trap; although it is not connected, which would allow Chip to walk directly over it into the exit, there is one monster capable of walking onto that square - the teeth located at the beginning. Begin this route in even step and follow the 295 route exactly, excluding the green key, up to the point where Chip passes the sockets guarding this exit. Using even step, the teeth will emerge from its current location at an alcove UR off the exit the turn after Chip lands on row 13. From this point on, move 2D [10] D 3L [1] 3D 3R 6U 6L [3] 2R [2] 4R 4D 6L 2U to get into the exit.

The expected way to get the teeth to step on the buried trap is to move around to the west side (worth 296), but at this very moment in time, if the route is executed perfectly and in even step, the pink balls can fit behind the teeth and keep them from moving U onto row 15, such that Chip can pull the teeth directly west across. This also only works because the balls are ahead of the teeth in the monster list.

This route is much more difficult, as there are no spare moves; however, one exception is running into one wall tile in the force floor section, which loses [1/2] but can be paid back by a spring slide leaving the room. Such subtleties are key to advanced play and are used heavily in AVIs and TWSs to make the solution as easy as possible by allowing viewers to recover from specific common errors.

In Lynx, the buried traps, ice skates (D off the last chip) and green key will make the level unplayable. Move all of them to the upper layer (or in the ball section, remove the trap entirely and bar off the sockets) except for the two under the dirt; replace these with walls, since the paramecium would be trapped by revealed traps. Finally, move the green key to some location where Chip must take a [2] detour to collect it, such as [8, 19], [11, 23] or [13, 23], and then remove the skates entirely since Chip doesn't need them. Even if he did, it would be to go through an ice corner, which is illegal in this ruleset.

Only the 295 solution will be possible with this fix, as the central trap is no longer erasable. 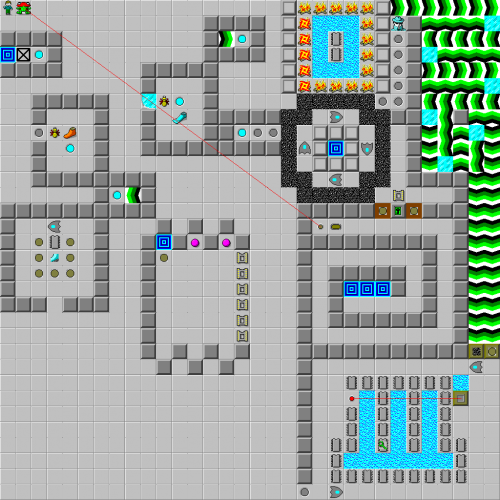