Jump to navigation Jump to search
This article is about the 119th level of CCLP1. For the 72nd level of CCLP4, see Sewerway.

The Sewers is the 119th level in Chip's Challenge Level Pack 1. This level is full of "muddy" water and a long shaft of force floors down the middle representing a sewer canal, hence its title. Even step is recommended.

Dive into the force floor tunnel, then head west at the bottom to find a teeth. Off the gravel, move 3L [3] 2U 2L [4] 5D >RU [7] to lure the teeth into the bomb guarding the two blue keys. Retreat to the east to find a group of three chips; do not yet collect the upper chip in order to keep the glider in orbit, but pick up the other two to clear the way for a block later. Push the block to the right 2R to free a glider, then follow 2L U [3] to stay out of its path. For the second glider, follow 2D 2L U and [1]; for the third glider, push the block 1U and wait [1], then U 2D L [3] and continue to the green button to the north; wait [1] on the way out for the glider circling this room, then return south.

Activating the green button will unlock three blocks just below Chip. Step under the middle block and follow 4U RULDL 3U D 2R 2U 2L and open the blue lock guarding the path forward. At this point, a small bust can be achieved under the MS ruleset; the intended solution requires all three blocks to be pushed onto the force floor slide, but using the Headbanger Rule, Chip can sneak across using only one. Ordinarily, this technique would require a rather tricky [1/2] wait, but thanks to the slide delay caused by the gliders below, this is not necessary. Under the Lynx ruleset, simply place the remaining two blocks onto the slide the same way as the first.

Now heading up a stream of force floors, snag this chip and press the red button 9 times in Lynx or 12 times in MS. Only 11 are actually required in MS, but the aforementioned slide delay requires that either a 12th block is cloned or some tricky [1/2] waits are employed that aren't worth any additional time. Plop the top block into the water at the start, then send in a second block to build a bridge to the outer area of the level. Now on the outside, follow the glider stream until you reach an ice tile. This boost surrounded by death may look intimidating, but fortunately, [1] can be dropped and no time will be lost. To get around the upcoming appearing wall, push block 5 R into the water and then push block 4 above it 2D and gain access to the chip at the bottom.

Returning all the way back to the glider stream, head to the next opening and take the blocks to the west over to the water on the right. Push this block L, then go north to find another chip and then push the block 2D, and then take the block back left to blow up a bomb which guards the second to last chip. Jump back on the glider stream and pick up the last chip right at the end, then strut through the socket and ride the slide to the exit. 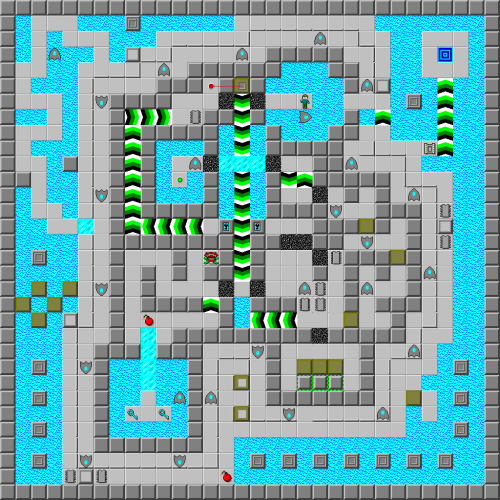 Chip leaped off the runaway train just in time. As he tumbled down the railroad embankment, he glimpsed the locomotive failing to negotiate a sharp curve. The ear-shattering roar of the subsequent derailment and explosion followed him down the steep hillside and into the water-filled ditch that broke his fall.

"Whew, that was close," he exclaimed, shaking off muddy water and wiping his glasses. More explosions boomed down from above while he limped out of the ditch. At least I took out part of Maximus's army, he thought. I suppose it's too much to hope that Maximus himself was on board.... But now how am I supposed to get to San Franchipsco?

Then he noticed where he was. The ditch he had fallen into was actually a storm sewer, and just ahead of him it flowed into a ten-foot-high pipe burrowing through the hill. That must empty into San Franchipsco Bay, he realized. It's a perfect shortcut! He felt a rush of nervousness at entering that impenetrable blackness, and facing whatever might lurk within it. But for Melinda's sake, he had no choice. Gritting his teeth, he groped his way into the sewers.