Tricks is the 108th level in Chip's Challenge Level Pack 2. This level's name comes from the consistent stream of tricks and secret obstacles that make this level one of the more unexpectedly difficult levels in CCLP2, and one of Dave Borgman's toughest as well.

Remove the first six chips, then collect the yellow key and move block 7 UL, also collecting another chip as well as the red key. Only one other block is safe; all the others are hot. Block 6 contains a blue key; open blue lock 2 and slide >R, which uses the red key as the yellow key is required for another use.

Walk downwards past the green locks, move block 2 L onto the brown button (the other two have water under them), and drop to the very bottom and only 2L through the blue walls. (The path to the west leads to two fake exits.) Run into the tank room and take the green key, then go back to the corridor of green locks, and with the secret trap held open, take the fire boots from it. Note that although Chip does not have to hold the trap open to reach the fire boots - buried connected traps do not take effect immediately even if they are closed - he will have to pass over it again.

Now, move towards the center of the level and move block 2 R to hold another secret trap open, and open the green lock above the teleport, which has the corresponding trap under it, to reach a room with six more chips in it. The blue walls have water underneath, so try to avoid touching them too much. Finally, slide >L back through the teleport to the start, take the other blue key from behind a previously unpushable hot block, and take the last five chips in the center. Move L from the socket to slide to a block which uncovers the exit. The other two paths have blocks with water and a bomb under them.

To fully conform Tricks to Lynx rules, change the three water-trapped blocks near the center to walls to avoid block slapping (the other group doesn't need fixing since block slapping would lose time instead), and either bar off or remove the fake exits since Lynx will read these as real exits. 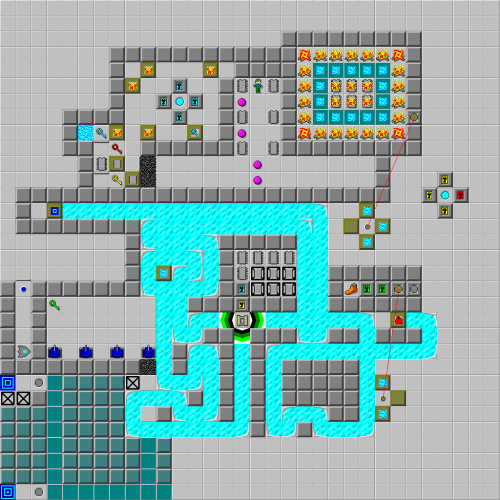