Warehouse II is the 122nd level in Chip's Challenge Level Pack 2. As with Checkerboard I, Warehouse II is an exceedingly hard puzzle with blocks, although slightly less so because it is a pure Sokoban level. The eight blocks in the north section have to be rearranged to the eight brown buttons, which is fairly easy, but if Chip does this immediately, he can't use the passageway to move the other seven blocks through the center and then to the southeast. Both of those puzzles are tough, and how to interact with the two passageways is another hard puzzle.

Generally, similar maneuvers will be repeated throughout the level: in the center, Chip will have to move one of the blocks from the west section out and then L 3D 6U L, collect another block and put it in the center, and then go back to the top section to move the first block out to the right. With what is now the center block, Chip can move two blocks in one run: walk the block 3D 6U L through, which will stuff the other block U in the process. Chip will also move that top block to the right and then southeast into place after the next block is put in the center. These are the two major maneuvers Chip has to know in this long, complex route. The AVI walkthrough does the rest. 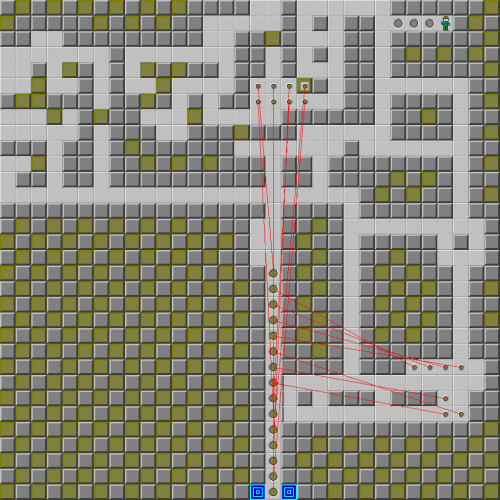