Madness I is the 28th level in Chip's Challenge Level Pack 2. In Dave's original set, DaveB1, it was named More Madness, as the order of Madness II and it was reversed in the set. Unlike that level, Madness I is not difficult at all, and the only significant puzzle is that of figuring out a partial post to reach the exit.

To complete it, take the chips across the top, then the chip from the paramecium area on the top, and go downwards to collect a second chip. Finish with the one to the right and the lowest chip, then play down to steal one chip from the bugs. Now, play to the southeast corner and collect the final two pairs of chips, arriving to the southwest. From here, sneak into the beehive and collect the final two chips, then move 3R U specifically to escape without having to wait.

In the four corners were four red buttons, which cloned blocks onto four brown buttons to allow these four blocks to escape the traps; move blocks 3 and 1 into the bombs, block 4 UR, and block 2 west into the teleport, which causes a partial post and allows Chip to exit.

In CCLXP2, the ice tiles underneath the chips in the corners were removed and recessed walls were placed adjacent to them. In addition, the blocks on traps behind the sockets slide out automatically when their respective buttons are hit; to counteract this, the CCLXP2 staff placed clone blocks facing towards each other on the traps. This makes Madness I the first level in CCLXP2 that cannot be solved in MS; hence, LX is appended to the title to indicate a Lynx-only level.

A hint was also added under the starting point reading:
The blocks below are on traps and moving against each other. Be careful how you deal with them! 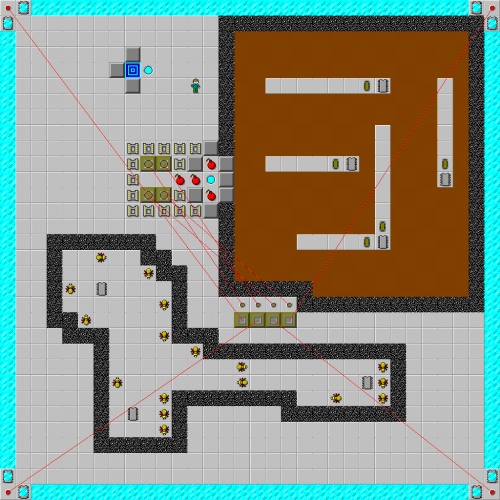