Magic Trick is the 108th level in Chip's Challenge Level Pack 3. It was created by J.B. Lewis. Its structure is similar to Trust Me and Trapped, with many different cooks based around the simple goal of picking up a red key (following from the yellow and blue keys of the other two), however this level is not known to be busted.

Slide south and walk through the pink balls to the green button, then pass through the west side of the level to the block jumble; move the first two blocks U, then walk R 3U and use a wedge to sneak to the recessed walls, collecting the green key under a block. Shove the next block 6R straight, then open the green lock and hit the blue button once; on the way out, push the block 2U further to allow the fireball to switch the tanks.

Return to the pink ball columns and hit the green button twice, then pass into the bomb room and clone 26 fireballs, waiting [1] before the last clone. Wait to the left of the room and pass the final explosion, then bridge to the yellow key and only then take the flippers; this is the only order of operations that allows Chip to escape. Walk back through the pink balls and to the start, then use the yellow key and pass two more sets of balls; move Chip to the physical brown button rather than push the block onto it, as neither is a quicker path and this removes waiting for the tanks above. Use the left path of tanks - this one contains a fake blue wall in the corridor - and collect the fire boots, and continue 6R past the fire into the next room.

The blue wall maze contains the yellow key to be used to free the block above; the only path is (2D 3R 4D 4L U 2L D). Move the block L 3D 2:[5L D] [1] 2D, then out to the central row of green buttons. The "magic trick" required to complete this level was originally seen in Eric Schmidt's level STUMPED?: push the block out to the third button, then retreat backwards such that Chip can hit an odd number of buttons while making an even number of moves, and thus push the block all the way to the other toggle wall.

Since there is no green button here, the walls switch; Chip is able to push the block onto the wall before it switches because the button is not pressed until Chip lands on the square, by which time Chip's Challenge has determined the block's R move to be legal and landed it on such square. Execute the trick one more time to open the final wall and bridge to the red key, then sprint west to the exit.

Chip had made it to the shore, but he had no idea where to go next. Pulling out the map, he located the isthmus that he had just crossed. To his dismay, he found that he was miles away from the clubhouse.

Some distance away was a moss-covered rock fortification. The map had it marked quite clearly, and below it, scrawled in pencil, were some handwritten notes.

Rock Castle: It is rumored that its cellar contains a hidden portal into the clubhouse.
But has anybody been able to get hold of the red key to the cellar door??

"Hmmm," Chip thought, setting off determinedly towards the castle. "I suppose it shouldn't be too difficult to locate a red key..." 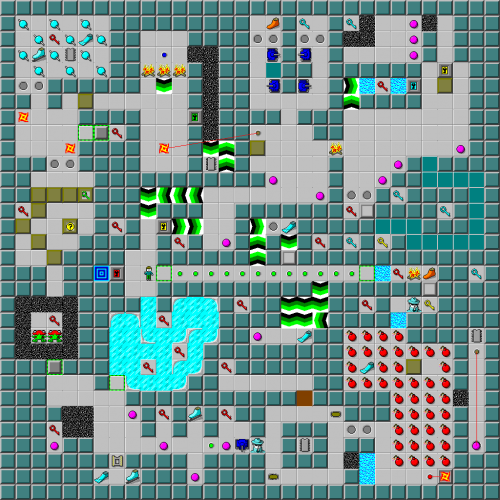