Microcosm is the 134th level in Chip's Challenge Level Pack 2. As noted by the hint, the center square is a "map" of the major features in the other 24 cells of Microcosm: hidden fire at coordinate [3, 3] in this room means there is some hidden fire in coordinate [3, 3] of the 5x5 subgrid; the green key at [1, 1] means there's green locks in it; etcetera. While Tyrethali Ansrath made Microcosm, this "map grid" type of level was later copied by other designers, including Eric Schmidt.

Take the green key, chip, and then hold the south key to pick up another two chips and yellow key; hold south again to blast through room 18's force floor circle and swap yellow keys to a chip. Take the nine chips to the right of this, move between the real blue walls, through the hidden fire room, and onto the chip guarded by the paramecia on either side. 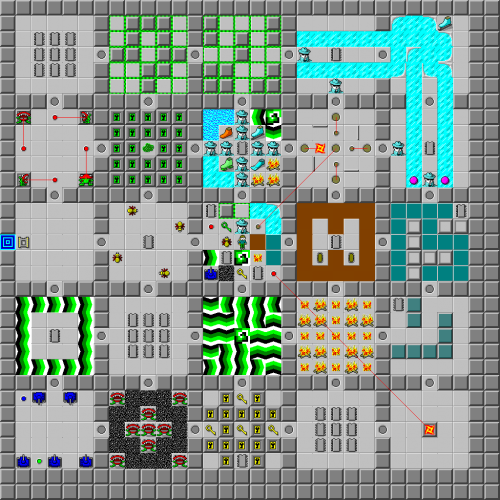