Zartacla is the 135th level in Chip's Challenge Level Pack 2. The obvious backwards "Alcatraz" might suggest a hard puzzle, and in fact, most of the blocks around the level are mined. The hint states that paths one square wide lead to death, two spaces wide lead to the different sections of the level, and that the one path three spaces wide is the path to the exit. Being a Tyrethali Ansrath composition, it is thus far simpler than it appears.

The bug at the start is a major wrench in your plan; when walking counterclockwise, Chip will often be delayed by him. A couple of well-timed green buttons will trap him in the center. Hit it right from the start, then open locks 5 and 4, and hit the button twice on the way to locks 2 and 1. Lock 3 can be opened later.

Continue west, a row above the exit, and step (3U R 2U) from the gravel to allow the teeth to hold the brown button down. Now, move to the south center, where groups of red keys and blue keys are visible. Collect them by removing both water spaces, then sneak a row directly under the exit, use the blue keys, and clone two teeth. Wait exactly [11] (using even step) from the trap as the teeth approach the brown button and collect the suction boots.

Chip can now move through the entrance on top; turn west and move each block into the water, but leave block 2 as dirt until you move block 3 D. It will slide to the east side and destroy the bomb to the right; remove the dirt in front of the tank, then switch it and dig to the ice skates. Move the tank back out of the way, then break into the far east section. Either block can be used; [2] extra will be used walking around the unused block either in or out.

Release the glider with the brown button above the ice to remove the bomb, and collect the three chips by following the recessed walls. Now, move through the center room and pick up the last chip, then enter the socket. The final challenge is moving through the cloning fireballs; run L 4D L 2D 2R U to get the fire boots. To escape, move 2U L [2] and, with fire boots, Chip can safely reach the exit on the far left. 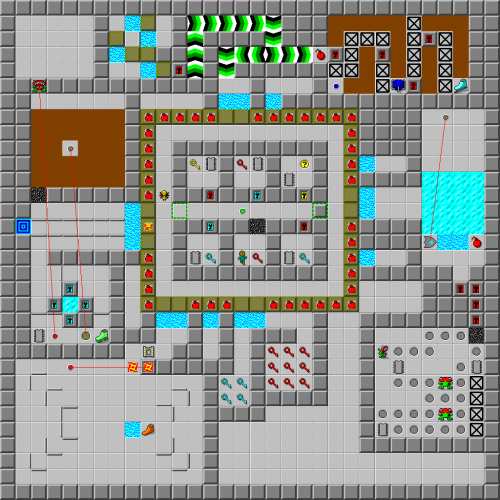