Entrance Examination is the first level in Chip's Challenge Level Pack 3. It was created by Tyler Sontag and was originally titled Review in his original set, as it is indeed a review of the basic and some advanced concepts of Chip's Challenge (such as partial posting). The competition for CCLP3 level 1 was intended to find such a level to lead off the set. Begin the level in odd step.

Block 3 in the first room is a hot block; push the other four blocks, all with computer chips and one red key underneath, over the water bridge and negotiate the itemswapper section to collect all the keys and boots counterclockwise - stopping at some point to use the hot block on the bomb in the first room. Sneak behind the walker, which is constrained to non-random movement under MS rules, and clone two fireballs at a time from the clone machine, then releasing them into more bombs.

This level officially introduced a new MS mechanic: if monsters clone directly into a trap, a monster that attempts to clone onto the occupied trap will be added to the monster list and can move after the trap is released. The eighth fireball, intended for the bomb behind the toggle wall, will not yet explode it as the toggle wall is closed - but opening the wall first would require Chip to return to the red button a fifth time.

Open the toggle wall, moving (2D 2L U 3L 5D 9R 5U) off the gravel through the wall maze, and continue to the teeth section. Remove dirts 4 to 7 on the top edge of the arena, then bring the teeth through the gravel maze to free a block from behind a bomb at the top. Shove this 7D 4R 4D R, pick up the last chips, and pass the socket and tanks, then collect the two red keys in the recessed wall maze. In MS, Chip can step backwards over the force floor in the maze, saving [1] over walking. In the final room, push both blocks into the teleport, following one of them, to create a partial post, and then follow the force floor paths back to the start and into the exit. 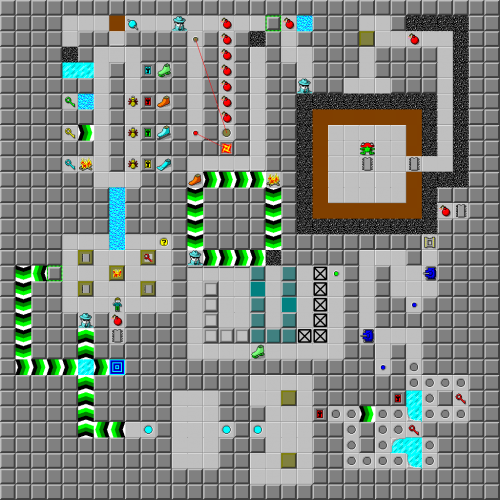