Wormwood is the 144th level in Chip's Challenge Level Pack 2. Being the 144th level, it has the same pseudo-ending sequence as Fireflies from CC1. In its original set by Eric Schmidt, it was also level 144. To complete Wormwood, there are two options.

The no boost route requires Chip to collect no more than 17 chips when getting out of the start room, such that no more than 19 fireballs can clone - 17 for each chip, one on the start and one that remains in existence on the clone machine but cannot enter view. The simplest path is 7R 8D RLU [2] RD and out, in odd step. The cloning is controlled by a glider that can only be stopped with a block, and only afterwards can Chip release the toggle wall safely.

As he approaches the center of the level, collect only chips 1 and 2, leaving chip 3 alone such that the nail formation will keep the block from landing in the corner; this requires one of the two recessed walls on the west edge to avoid. Return to the block room, where 48 blocks hide bombs, with the safe block 25 directly in the center. The 4 difficulty rating is due to the large number of unsafe blocks, despite the obvious location of the safe one. Push it straight down and use the nail to collect the suction boots, then the second recessed wall and second nail to take the block out of the room and stop the cloning.

After the green button is pressed, the fireballs explode 19 bombs and Chip can then finish the level; fireball(s) beyond 19 will teleport in front of the exit, permanently blocking it out. Chip cannot use the same route to sneak behind the socket because he will instead teleport to a thief (a monster-acting wall), resulting in death after the next >R slide.

The 539 busted solution, shown second, strategically moves the teeth in front of a winding stream where the fireballs will enter, trapping them until Chip returns to the beginning. With enough chips taken out of the room, Chip can escape before he is overwhelmed by the fireballs. Odd step is also recommended.

To clear out a sufficient area, move 4R 3D 2R U 5R 2:[D 3L D 3R] 2D LULDL (releases the teeth) U 2L 2U 3L UL 2U L 3D R 2D RURDRU 2R U 3D, which allows Chip to take the chips on the very bottom without disturbing the stream. In peace, walk out to the brown button, which begins the cloning, and into the northwest area. Only one nail is necessary, to collect the suction boots, so all three chips can be collected.

Go back to the start, collect the chips along the very bottom edge and trudge through the fire and force floors to a lone chip. Take the chips on the left end and get out quick with 3R 3D 4R 2U 2L 2U RDR [1] URD 3R U 2L, then walk to the exit. For the ending sequence, see Fireflies.

Wormwood is not possible in Lynx. The hint will stop the block from leaving its room; to fix this, move the hint to a location such as [18, 16]. The teeth cannot die in fire, so it is also necessary to make an element switch : fire, fire boots and fireballs into water, flippers and gliders. Even after all the fixes, block slapping ends the problem of the 49 blocks since any one of them can be used. 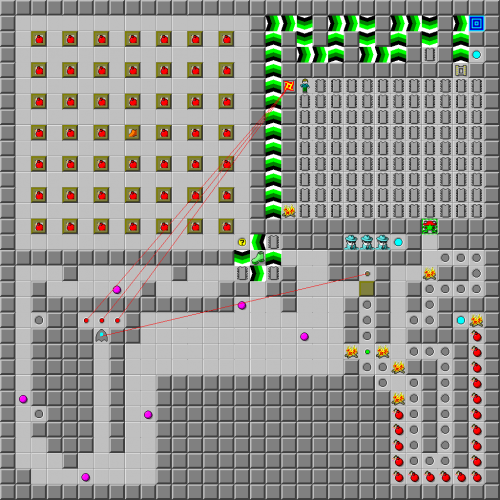