(Redirected from Sokoban)
Jump to navigation Jump to search 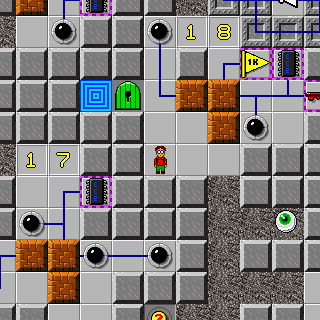 A Sokoban level, alternately referred to as a Pocoman level, is a term used to identify a level falling under a specific type of level theme: the movement of blocks onto specific squares to either remove water, bombs, hold down traps, or for some other objective. A Sokoban section means that part of the level holds this property.

The shown level, Crazy, as well as its sequel, Crazy II, are examples; Chip must move three blocks onto three black buttons in each room to collect a computer chip, a key, and a bonus flag.

Sokoban (1982) and Pocoman (1989) are two games that work the same way as these levels: the character must move objects onto squares, and then finishes the level when this is done. Therefore, the two terms are often used interchangeably. However, in particular, Chips on the Blocks's first section is a direct copy of Pocoman's first level (which is Sokoban's second level), leading the Pocoman name to be in occasional use.

An additional, more generic reference to a Sokoban level is a block pushing level, so principles of block pushing are frequently used. In Crazy and Crazy II, all of the Sokoban sections must be solved quickly to obtain all of the bonus flags; to solve these levels faster, certain rules of Sokoban levels must be applied. The rules of double bridges, turning bridges, and the Block Donut Rule and Block Retrace Rule come in handy as techniques for many Sokoban levels.